Vitamin B12has a large and complex structure among the vitamins.
Another uniqueness of this vitamin is that it has cobalt, a metal ion, in its structure.
Hence the term cobalamin is referred to compounds having the activity of vitaminB12. Human body uses two forms of cobalamin namely 5-deoxyadenosyl and methylcobalamin.
The vitamin B12 supplement commonly used is cyanocobalamin and in human body it readily converts to the above two forms.
Almost all micro-organisms including the algae and bacteria synthesise this vitamin.
This is the only source of vitamin B12 production in nature.
Only insignificant amounts of this B vitamin is produced by the intestinal flora of the human beings.
Of the water soluble vitamins vitamin B12 has the exemption of being stored in animal tissues especially liver. 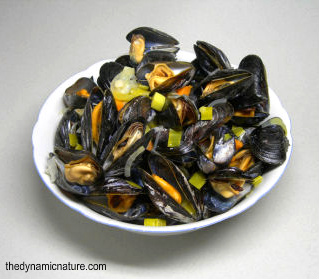 shellfish are good source of vitamin B12

Micro-organism synthesised vitamin B12 enters the food chain of human beings through the food sources of animal origin.
Vitamin B12 is required for the synthesis of amino acid methionine.
By biochemical process this vitamin plays a vital role in producing energy from proteins and fats and also in the synthesis of the blood pigment haemoglobin.
Apart from being important for the normal function of the human nervous system, vitamin B12 has a big role to play in the synthesis and utilisation of other B vitamins.
Biological processes like DNA synthesis, fatty acid metabolism and energy production are dependant on vitamin B12.

Deficiency
Deficiency in this vitamin may occur either due to poor intake or due to poor absorption especially in the elderly persons.
Persons who consume complete vegetarian diet are at the risk of developing the deficiency of vitamin B12. If they consume at least dairy products the risk is reduced.
Malnutrition may also occur in a condition called Pernicious anaemia, an auto-immune disease.
There is inflammation of the wall of the stomach and the stomach cells are destroyed by one's own anti-bodies.
This leads to atrophy of the parietal cells and their inability to secrete hydrochloric acid and produce intrinsic factor.

In such a situation, vitamin B12 which is food bound, is not released from the food and its absorption is inhibited.
Megaloblastic anaemia, wherein blood corpuscles are enlarged, may also occur due to the deficiency of vitamin B12. In a situation of slight insufficiency, fatigue, dementia and depression may occur.
High deficiency has been found to lead to mania and psychosis.
Severe deficiency of vitamin B12 results in irreversible damage to nervous system and brain.
Early symptoms of deficiency manifest as white spots on the skin particularly on the face due lack of melanin in the area, as itch and pain in the tongue, as twitching of the eye, as breathlessness, as sores on the corners of the mouth, as tingling pain on the hand or wriest, as migraine head-aches, as memory loss and as disorientation.
Over a length of time these symptoms become irreversible and may not respond to supplements.

A few cases of dermatitis and stomach irritation are encountered due to very high doses.
Side effects were observed when high doses were administered along with certain antibiotics.

Disclaimer: Not professional advice - The above content is just for informational & educational purpose only If you need specific medical advice please seek a professional doctor who is licensed or knowledgeable in that area.