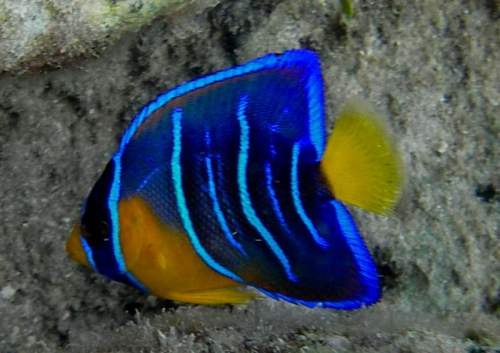 Reproduction and spawning in queen angelfish

Queen angelfish (Holacanthus ciliaris) may breed more than once in a year. But much of the spawning occurs in the winter months. Spawning in these fish occurs soon after the sunset. These marine angelfish species are observed to move about singly or in pairs. Hence they were thought to be monogamous. However, pre-spawning groups have been observed, consisting of one male and up to four females. These fish spawn in open waters and there is no parental care. Unlike other broadcast spawning fish species, the queen angelfish do not form large schools (aggregations) to spawn.

The male courtship display includes frequent flipping of pectoral fins and moving in circles to draw the attention of female. If the female queen angelfish is responsive and ready for spawning, it will ascent the water column. The male will follow the female closely, frequently touching the female vent.

When they have risen to about 20 meters depth, the male comes alongside, positioning its vent close to that of the female. The female starts releasing eggs and the male simultaneously releases clouds of sperms into the water. The female may release up to 75,000 eggs. The eggs are fertilized externally. The transparent fertilized eggs absorb water and become buoyant, floating with the movement of water current.

The eggs hatch in about 15 to 20 hours, depending on the water temperature. The larvae, lacking effective eyes, fins and digestive organs, float in the water with wriggling movements, using the yolk for energy and growth. The large yolk-sac gets absorbed in about 48 hours. The larvae, by this time, become free swimming, attain fish-like appearance and start feeding on plankton. They feed voraciously and grow rapidly to reach the juvenile size (20 mm) in a month.

The juvenile queen angelfish settles to the bottom among the colonies of sponges and corals for protection and for food sources. The young fish establish cleaning stations, picking ectoparasites from other large species. The juveniles feed on algal matter adhering to the corals and sponges. The juveniles appear much different from the adults. The young queen angelfish has dark blue body with yellow tail, yellow snout and yellow paired fins. They have iridescent, brilliant blue vertical bars on the body. As the juveniles grow, their body color gradually changes from dark blue to iridescent blues and yellows of adult fish.

In juvenile stage the queen angelfish appear very similar to young blue angelfish. The blue vertical bars in the juvenile queen angelfish are curved whereas these bands are straighter in blue angelfish. The juveniles of H. ciliaris occur in offshore reefs whereas the H. bermudensis prefer inshore waters, reefs and bays. The hybrid juveniles may have a mix of young parent fish characters. In aquarium trade juveniles of the size 20 to 75 mm are available for tank rearing.

The queen angelfish is closely related to blue angelfish (Holacanthus bermudensis) and their natural hybrids are prevalent in Bermuda. The hybrids carry varying color characteristics, ranging from H. ciliaris color patterns to that of H. bermudensis. Unlike the parent breeds, the hybrids tend to move above the coral reefs.

Any cookies that may not be particularly necessary for the website to function and is used specifically to collect user personal data via analytics, ads, other embedded contents are termed as non-necessary cookies. It is mandatory to procure user consent prior to running these cookies on your website.